The Finch family have been farming in Chedworth since 1928 and have had a dairy herd ever since we arrived. Over the years the way we milk and deliver has changed, but our values remain the same. Happy cows means tasty yogurts, cream, milk &  beef.

We started yogurt production in November 1990, with a small 50 litre pasteuriser and were  potting by hand. To begin with we made Plain,  Strawberry, Raspberry, Cherry, Forest Fruits and Peach Melba. On average we made about 25 litres a week (150 pots) and sold them on our milkround .

In 1991/92 we started selling them in some shops  in Cheltenham, gradually making more pots. Come the mid 90s we were making  about 50 litres a week (300 pots).  Expansion started in the late 90's, when we began supplying shops outside Cheltenham. Moving up to about 100 litres a week, we bought a semi-automatic potting machine and a bigger 100 litre pasteuriser in 2001. A dedicated room for yogurt production was opened in 2002, and three new flavours were added - Blackcurrant, Rhubarb and Toffee.

By 2005 we were making 500 litres a week, with a dedicated fridge van purely for direct to shop deliveries. In September 2006 our yogurt man  went to making it full time. We added another 100 litre pasteuriser in 2008, and another new flavour - Gooseberry.

The Grunwald fully automatic filler arrived in December 2010. Production then upped to 700 litres a week. We have been making, on average, 11,000 small pots and about 2500 large pots per month for the last 8 years. 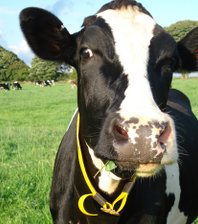 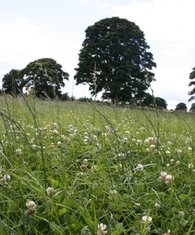 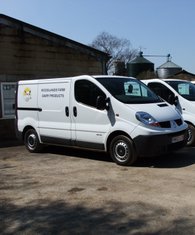 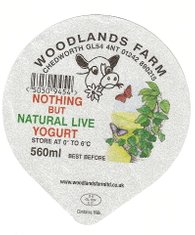 Our free range dairy herd are made up of friesians cross holstein as these not only produce the nicest creamiest milk, but the best beef animals. They are all naturally fed with grass,  corn and silage from the farm  .

The Finches have been farming in the Cotswolds for over six generations and here in Chedworth for four, moving here in 1928. Since then we have changed our machinery and ways of working, but never our core values. Non GM food, free range cows and fresh grass with lots of space for them to run.

You could say we have farming in our blood.

We have around 40 cows in milk at any one time and at present we still milk each one by hand.  Our cows are milked at 5am and 3.30pm  every day, including Christmas Day!

The morning milk is used to make our yogurt.

Our yogurt is  made with our  fresh milk and thick yellow cream. Yes this means it's not fat free (3.8-6.6%) and yes it means that it has calories in it, but we're pretty sure it will taste so much better than any skinny, fat free, high sugar content yogurt.  Anyway, we're not counting your calories...

If it makes you feel better the fruit ones have got to count towards one of your 5 a day*!!

*This fact is not  backed up by any scientific evidence whatsoever, infact you could say it is all a load of baloney, but we bet it made you feel better!